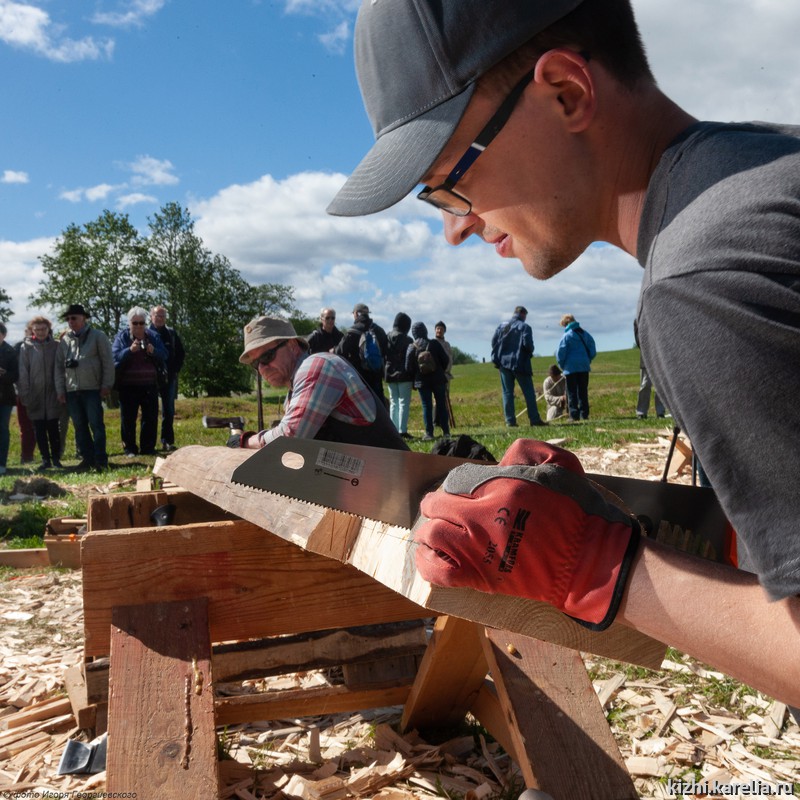 On 11-12 of June11–12 the Festival of Carpenters was held on wpnderful Kizhi Island. The event gathered teams from the Republic of Karelia, Irkutsk, Archangelsk district, Finland and Germany. During 24 hours carpenters-professionals  without rest were creating their works with only hand tools.

The best carpenters from Russia and Europe work  side by side in very peaceful atmosphere. But as in each hazardous contest dramatic situation took place. German carpenters “Roland brothers” did the very complicated job to divide the log into two pieces in length found out that the wood is spoiled by microorganisms and the couldn’t use it. The carpenters always help each other. In a few minutes the head of the carpenters Centre – Andrey Kovalchuk – found a new log and helped the German carpenters. And Roland Brothers started from the beginning.

During the Festival organizer knew many interesting facts about the participants. For example it’s turned out that one of mambers of the team of Vocational College of Oulu (Finland) is a mayor of town I, which s situated on the North from Oulu. Carpentry is his hobby.

During the Festival guests of Kizhi Island could not only watch the carpenters working, but try on a role of carpenter by themselves. There were various activities: carpenters relay (log cutting), making shingles and traditional dolls, assembling sauna house model, nails hammering contest, Jenga game. The Folk group of the Kizhi Museum decorated the event with singing and dancing.

The Kizhi Island visitors had an opportunity to vote for the winner in the People Choice Award nomination. The voting was organized in a special way – to vote people had to hummer a nail into the stub near the team.

The team of Vocational College of Oulu (Finland) won the People’s Choice Award. The team from Karelia “Exiton” won the first prize, which built a the roundabout for children. All participants received prizes and Participant Certificate.